From the Diaspora to a Place in the Heart" was concieved through a mix of creative curiosity, passion for human rights issues and serendipity. Susan had begun playing with video and image programmes and wanted to test-run them with musical accompaniment. We found that the semi-improvisational nature of our performance (locally referred to as "winging it") suited this genre really well; "Silkweed" was born!

From the Diaspora to a Place in the Heart" was the culmination of many previous works including a music and visual installation piece included in an art exhibition in Northcote, Melbourne.

Many of the songs we were performing already had a strong social justice theme, we were variously involved with advocacy groups, and the government policy of the time in regard to refugees was, (and, unfortunately, still is) appalling.

We concieved a somewhat broader theme of a general sense of displacement in both our own and other cultures. For example, the beautiful "Danny's Song" by Danny Bailey refers to the aboriginal experience of first encounters with whites ("did you see them in your dreaming?"), "Swathed in Silk" evokes a longing for a past time, and also included is Holly Near's "Hay Una Muher" about the "disappeared" women of Chile.

Creating slideshows is very time consuming, and at times frustrating....sometimes we want to get back to just playing music! Yet the response to the joint impact of visuals and music, especially when there's a message to impart...is absolutely worth it. 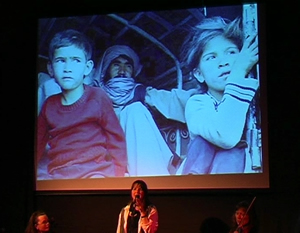 "From the Diaspora to a Place in the Heart explores in songs and visual images, themes of refugees, homeland and a sense of place and belonging...............The concert, supported by slides and video footage of human dislocation has moments of humour and of sheer beauty as strings interweave through Erin Collins' soaring vocal lines" ....from Boite media release; August 2003.

One slide screen , one data projector with technician, two musicians either side .....and forty five minutes of intense concentration.

"From the Diaspora to a Place in the Heart" was premiered at Cygnet folk festival in January 2002. The show was so well recieved that Cygnet re-booked the show for the following year.